This is the first in a series where we will take a look at various ETF’s and how they play a role in an “Austrian Economics” influenced portfolio. 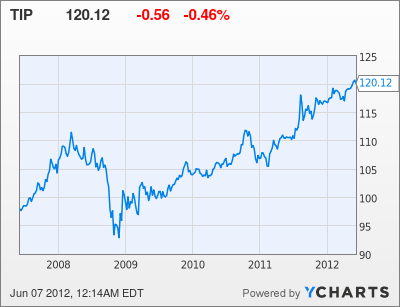 Followers of the “Austrian School of Economics” naturally fear the return of a 70’s style (or worse) inflation, but at the same time understand the deflationary risks associated with the bursting of a credit bubble.  Balancing this tightrope walk through competing economic pressures just might be the biggest challenge that any investor faces today.

While you are not likely to endure a cocktail party conversation in which someone brags about their broker’s hot tip to invest in inflation protected treasuries; the fact remains that TIPs, as they are known, are perhaps the most underappreciated club in the investment golf bag.  As SmartMoney’s Bill Bischoff recently wrote “One way to protect your nest egg from the ravages of both inflation and deflation is to invest a portion of your portfolio in U.S. Treasury Inflation Protected Securities (TIPs).”

TIP is an ETF that as described by iShares; “seeks results that correspond generally to the price and yield performance, before fees and expenses, of the inflation-protected sector of the United States Treasury Market as defined by the Barclays U.S. Treasury Inflation Protected Securities  (TIPs) index.”

In English, that means this ETF holds bonds (average maturity of ten years) with the full faith and credit of the US Treasury, that will be adjusted to compensate for the a rise in the U.S. Consumer Price Index (CPI).

While the concept of Treasury Inflation Protected Securities may be simple, the actual mechanics, can get quite confusing.  Following is a simplified explanation of how TIPs work.  For a more nuanced look see the SmartMoney link (mentioned earlier).

The inflation adjustment of a TIP Bond is the amount over the original principal that is returned to the investor at the maturity of the bond.  As an example say an investor purchases a “TIPs” bond for $1,000 that matures in ten years.   The yield of a TIPs bond will generally be lower than the yield of a corresponding treasury by the amount that the market projects inflation to be. So the TIPs bond may carry a coupon of say 1%, while the Ten year treasury has a coupon of 4%.  In such a case the market is “predicting” that CPI inflation will be 3% for the remaining life of the bond.

For the next ten years the TIPs investor will receive interest payments of $10 per year.  At maturity, instead of receiving the original principal of $1,000 back, a principal adjustment is made (actually the adjustment/accrual is made twice each year, but for simplification we’ll focus on maturity).  If inflation did come in at 3% over the ten year period, the principal would be adjusted to approximately $1,343.  So the total return on the investment is $100 in traditional interest and a $343 dollar principal adjustment at maturity.

By contrast the return on the traditional 4% bond was $400 over the life of the bond.  In this example there is a slight difference in cash flow over the life of the bond from its TIPs counterpart even though the inflation expectation matched the actual rate.  This has to do with the time value of money.  Though the traditional bond investor received $43 less than the TIPs investor, she (sorry gentlemen) received the money sooner.

If inflation had come in at 5% instead of the anticipated 3%, the TIPs investor would receive approximately  $1,628 (original $1,000 plus 628 adjustment) at maturity as well as having received the $100 in interest over the life of the bond.  The traditional bond investor was stuck with the $400 cash flow yield and actually watched the purchasing power of her investment decline.

Though if doesn’t happen often, there are times when the CPI actually decreases. In this scenario the inflation adjustment  (accrual)  would decrease accordingly, but an investor in a TIPs bond will be protected by the fact that the face value will never be adjusted below the original principal amount.  The interest paid however, would be affected by any downward adjustment in CPI.  Again for a more detailed look at the logistics of TIPs bonds please see the previously linked article.

Seeing as this article is about  TIP the ETF, it is important to note that an investor in TIP itself, is not directly protected from downward CPI revisions.

Since its inception on December 4, 2003 the biggest drawdown (peak to trough of market price) for TIP occurred during the aftermath of the 2008 financial crisis. Between March and October of 2008, TIP fell about 17%.  For comparison purposes the S&P 500 Index suffered a total drawdown of more than 57% before bottoming in March of 2009.

The TIP drawdown came in conjunction with a 3.8% drop in CPI which occurred from July of 2008 to January 2009.  A 3.8% drop in CPI might not seem like much, but historically it is enormous.  This resulted in the average yearly drop in CPI for 2008 of 0.4%, which was the first negative year for CPI since 1955 and only the third yearly drop since the end of the Great Depression.

On the flip side, the TIP has enjoyed an annual average return of 6.2% (through 3/31/12) since its inception; which is slightly higher than the S&P 500 total return over the same period.

There are however, a couple of other potential hazards for TIP that should be considered.  One is the concern that CPI understates actual inflation.  When (if) this is the case an investor will see positive inflation (and returns) but still see the purchasing power of the investment decline in terms of everyday goods.

The other risk is rising interest rates.  The thirty-one year raging bull market in bonds has spawned an entire generation of investors that has no concept of bond market risk and hypnotized  another into thinking of interest rate risk as something akin to polio:  a horror form a bygone era that has been vanquished by our greatest intellectuals.

While we have not had a period of consistently rising interest rates to see how TIP would react, the spring of 2004 provides a brief window of opportunity for observation.  Between March and May of that year the ten year treasury rate jumped from 3.7% to 4.85% .  As indicated from the chart below on a total return basis TIP, lost about 7%, but was able to retake its high water mark, when rates fell back to the 4% area. 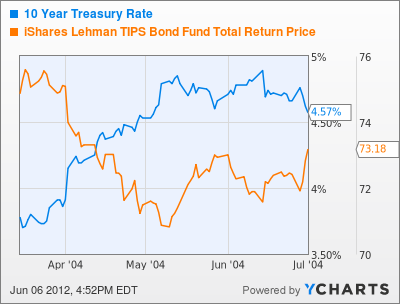 Though the interest rate risk is significant, given that Federal Reserve Open Markets Committee has indicated that it “anticipates” an accommodative policy for the foreseeable future, the current economic environment is in my opinion ideal for Treasury Inflation Protected Bonds.

TIP has been and will continue to be used in both the BIA Core Wealth Allocation and BIA Global Strategy Model Portfolios.    In the Core Wealth Allocation portfolio TIP is a core holding.  In the Global Strategy Portfolio (which is more trading oriented) TIP serves as both a core holding as well as a shorter term position to “park” in, when the portfolio is already sitting in substantial cash or short term treasury ETFs.

It should be understood that this is not a personal recommendation to invest in TIP or TIPs bonds.  As the saying goes anything, including water is poisonous with the right dosage.  As valuable of a tool as it can be, in the right scenario TIP  could sustain significant loss of principal value.  Investors need to consult their financial advisor to determine what (if any) allocation to the TIP or TIPs bonds is appropriate.

Click here to request a proposal from Barnhart Investment Advisory

The BIA Global Strategy Model Portfolio  engages in short term aggressive, speculative strategies with an appropriate portion of an investor’s overall investable assets. Investors should conduct their own due diligence and seek the advice of a financial and/or investment  professional before making any investment decisions.

At the time of this article BIA Model Portfolios, client portfolios and principal have a position in TIP.  All such positions are subject to change without notification.

View all posts by Barnhart →