Anyone who considers themselves an accomplished skeptic, should  be familiar with an  often used quote attributed to  German philosopher Arthur Schopenhauer: “All truth passes through three stages. First, it is ridiculed. Second, it is violently opposed. Third, it is accepted as being self-evident.”

No doubt Meredith Whitney is quite familiar with  the ridicule and scorn that comes with an unpopular opinion, both as an early skeptic on banks prior to the financial crisis of 2008, and more recently for her infamous prediction of a coming wave of municipal defaults.

John Maynard Keynes famously said that “the market can stay irrational much longer than one can stay solvent.  His quote perfectly sums up the age old conundrum in which one  tries to determine if an investment decision is wrong or simply early.

A recent article in the Investment News suggests that perhaps Whitney was early and, “may yet be vindicated-not because of her prediction of mass defaults, but as a result of the red flag that she raised about the financial stat of cities and towns.”

Indeed the title of the article is “Why muni bondholders may take it in the teeth after all,” and investors should be on notice.  Not because of outright defaults but because of what is likely to become an increasing willingness of municipalities to use Chapter 9 bankruptcy.

According to the industry publication The Bond Buyer , “San Bernandino, CA’s decision [last] week to authorize a bankruptcy filing, which would make it the third California city to do so in less than a month, has shaken the municipal market and set up a likely showdown with bondholders.”

While the trials and tribulations of politicians who have tried to reign in municipal pension and other benefit costs are well documented, the use of Chapter 9 bankruptcy will increasingly put bondholders in the cross hairs as well.

Bankruptcy attorney Jay Reding, of the firm Larkman Hoffman, writing in an article published on his firm’s website notes that “Chapter 9 allows a municipality to gain ‘breathing room’ from its creditors, including  GO bondholders.  Meanwhile, the municipality may reorganize its debts by reducing principal, extending maturity dates, or refinancing the debt.”

To date, the biggest reason municipalities have  been reluctant to go the Chapter 9 route  is to avoid the scarlet letter stigma of having done so. As the Investment News article says once the stigma has been removed and entities emerge in “a lot better fiscal shape than before they went bust, watch out.”

The muni market has seemed to take the recent rash of California bankruptcies in stride. 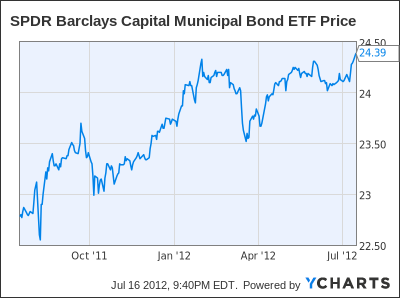 But make no mistake, as the fiscal strain continues to build on municipalities the political pressure to include bond holders in sharing the pain of austerity will be overwhelming.  No one is going to have any sympathy for, let alone expend precious political capital to protect, wealthy investors collecting tax free income.  Believe me that is exactly how municipal bond holders will be portrayed.

The sooner muni investors accept this “truth” as “self-evident,” the better they will be able to properly assess the risk that they may be facing.

An investment in pitchfork and torch manufactures might not be a bad alternative.

Click here to request a proposal from Barnhart Investment Advisory

View all posts by Barnhart →

Market Recap and a Look Ahead (week ended 7/13)
Does Anyone Know How to Work This Thing? (Friday Humor)